How Anthem and Cigna went from hostile takeover to friendly merger 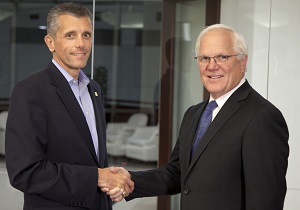 When Anthem and Cigna announced a $54.2 billion deal Friday, it marked an abrupt turnaround from where negotiations between the two health insurers stood just a month earlier.

After Cigna reportedly rebuffed at least two takeover offers from Anthem, the larger insurer went public with its $184 a share offer--a move that drew a swift rebuke from Cigna's board. Talks didn't stall for long, however, as the insurers' top leaders indicated Friday that they had been working feverishly on making sure the deal benefited both Anthem and Cigna.

Here's a look at how the companies' positions on the deal have evolved:

Then: In its rejection of Anthem's offer, Cigna's board cited what it deemed Anthem's lack of a growth strategy.

Now: In a call with investors Friday, Cigna CEO David Cordani, (pictured above left), said the deal gives his company the opportunity to "accelerate sustained growth" that it has experienced in the last five years. "The complementary nature of our businesses will allow us to leverage the deep global healthcare knowledge, local market talent and expertise of both organizations," he said in a statement.

For his part, Anthem CEO Joseph Swedish, (pictured above right), told investors that the acquisition of Cigna will improve the company's ability to serve customers across commercial, Medicare, Medicaid and international markets. In particular, the merger gives Anthem a chance to expand into states that it hasn't reached through the Blue Cross Blue Shield (BCBS) Association, and also allows it to grow its Medicare Advantage business--a hot commodity for insurers.

Then: Cigna told Anthem it was concerned about "complications relating to your membership in the Blue Cross Blue Shield Association … and the related antitrust actions."

Now: Swedish told investors that the companies internally analyzed how their merger would apply to Blues rules and added that Anthem and Cigna are confident that the combined company will not violate any of them. "We are a Blue organization and we will abide by those rules," he said. Now that the deal has been announced, Anthem will "have a dialog" with BCBS to discuss any issues related to the merger, Swedish said.

Then:  "Your insistence that one person (Joseph Swedish) assume four roles, including Chairman of the Board, CEO, President, as well as Head of Integration, is disconcerting and risky," Cigna's board wrote to Anthem, adding that its proposal "raises very serious questions regarding your views on proper governance." But Anthem responded that it is "disappointed" in Cigna's insistence on "uncommon governance demands."

Now: When the deal closes, Swedish will indeed serve as the combined company's CEO and chairman of the board, but Cordani won't fade away--he'll serve on the board and as the company's president and chief operating officer. As for overall board makeup, Cordani will be one of five representatives from Cigna, and Anthem will be represented by nine of its current board members.

"The spirit of our engagement going forward is one of total collaboration, total alignment," Swedish said.

Are You Still on Edge Regarding Edge Server Requirements?

Data quality is the secret to a successful Edge Server strategy - one that achieves risk adjustment and reinsurance payout goals. Learn how one health plan exceeded CMS data submission and acceptance requirements with a 99.4% data acceptance rate! Register today!