With the spotlight shining brighter than ever on the rising cost of prescription drugs, two health plan executives offered their perspectives Friday about how the trend is putting pressure on their margins and their members.

Richards' nonprofit, provider-owned health plan worked with a 600-member employer group. After years of experiencing stable costs for care and drug benefits, the company saw its average drug expense rise from $500,000 per year to $750,000 per year, a shift she says left it "absolutely shocked."

It turned out the cost spike was due to one member's need for a very pricey new drug to treat cystic fibrosis, which left the company with the difficult decision about whether it might need to stop providing prescription drug coverage altogether, Richards says. 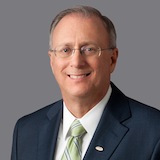 But as Bennett (left) points out, some dramatic price increases aren't just limited to new specialty drugs--they're also affecting drugs that have been around for 20 to 30 years. For example, the EpiPen's price has jumped 488 percent in the last four years, despite the fact that epinephrine is not a new drug.

"I don't know ... any rational explanation for that," Bennett says.

In addition, price hikes for diabetes drugs like NovoLog and Glumetza stand to affect millions of Americans, according to Bennett. Rising pharmaceutical costs are the "single biggest driver of premiums today."

Many years ago, drug coverage was less than 10 percent of the total expenditure for all cost of care, but that rose to 13 percent by 2010, and is now 17 percent, according to Richards. This increasing amount of insurers' budgets going toward drug costs puts pressure on other valuable care services, she adds.

As for solutions, Richards says there must be meaningful competition in the pharmaceutical industry--the kind that encourages lower costs and higher quality rather than climbing prices. Insurers also need the ability to selectively contract for individual drugs within a class of drugs.

Another idea, she says, is the concept of value-based deals with drug manufacturers, in which insurers or providers require the companies to link their prices to results.

Richards says SelectHealth works with its provider partners on price transparency efforts, particularly when it comes to helping physicians understand the actual cost of drugs.

Bennett, however, argues that price transparency is not equitable among the various healthcare stakeholders, as insurance premiums are highly regulated while provider costs--and especially drug costs--are much more opaque.

"We have this problem where we're very transparent about health insurance premiums but not about anything else," he says.

He also cautioned about relying too much on the free market to regulate drug costs. "What if we allowed someone to control the water supply that you need to live, and they could charge whatever they wanted?"

Related Articles:
Payers, providers push manufacturers toward value-based deals
Why payers must focus on paying value for Rx drugs
Why insurers should negotiate with manufacturers for better drug prices
How to pay for breakthrough treatments ... without breaking the bank
Insurers figure out ways to cover pricey treatments

Organizations across the healthcare industry are continuously challenged with understanding the impact of the recent Federal Communication Commission Declaratory Ruling and Order released on July 10, 2015. Join Neustar for this webinar April 6th at 2:00pm EST as we discuss the interpretation of the new TCPA order for the healthcare industry and share best practices learned from other industries for contacting consumers via phone or text for notifications, debt collections, servicing, alerting, and other communications. Register Now!

Latest Commentary
Employer-based health insurance: Should it stay or should it go?
In struggle over future of ACA exchanges, consumers caught in the middle
Questions about HHS transparency impede health reform progress
Amid Obamacare turmoil, payers and providers must mend fences and collaborate
10 health insurance stories to watch in 2016
END_OF_DOCUMENT_TOKEN_TO_BE_REPLACED