Just as Medicaid has helped expand health coverage and affordability to millions of Americans, private insurers also strive to expand healthcare access through innovation, according to executives who spoke at an event to celebrate Medicaid's 50th anniversary.

AmeriHealth Caritas, a Philadelphia-based Medicaid managed care health plan owned by Michigan Blue Cross Blue Shield and Independence Health Group that serves 6.6 million people, gathered politicians and healthcare thought leaders Thursday at the Newseum in the District of Columbia to discuss the past, present and future of the government health program that serves the nation's poor.

For example, the company piloted a telemedicine program to offer behavioral health services to members who have limited access to providers, Tufano said, adding that specifically in the District of Columbia, mobile health units have done "wonderful work" to reach the underserved. For several years, the company also has used mobile health units to bring dental services to rural populations, he said, adding that "dental health is a huge issue in the Medicaid population."

"Innovation doesn't always have to be in an IT-kind of technology way, it can be thinking differently about [an issue]," he said. "But, we're leveraging it every chance we get." 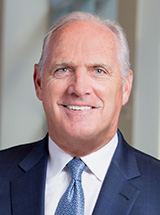 For Independence Health Group, the nonprofit parent company of AmeriHealth Caritas and Philadelphia-based insurer Independence Blue Cross, finding new ways to engage members is central to its core mission and requires it to take a personalized approach, President and CEO Dan Hilferty (pictured right), told FierceHealthPayer in an exclusive interview.

"The challenge in some of these special needs populations, including the poor and vulnerable, is making sure that you're connecting with them in ways that they can relate to and ways that they can involve themselves," whether that means going to a community-based clinic, going to see their primary care physician or keeping up with their medication regimen, he said. "So that challenge is to make sure we connect people--regardless of income, regardless of culture, regardless of language--connect them to the healthcare system."

One way his company has undertaken this challenge is through the Independence Center for Healthcare Innovation, which it started two years ago to invest in innovative systems and technologies such as mobile apps or a glow-cap that reminds seniors when to take their medications, Hilferty said.

"We're making investments in these innovations that we think make sense," he said, adding that the Independence Health Group hopes the innovations can be both profitable and "that we can use them to build this circle around every member that we serve."

Indeed, technology can be a boon to positive healthcare market disruption, Theranos founder and CEO Elizabeth Holmes, Tufano's fellow panel member, pointed out. Theranos, a health startup that performs routine lab test with only a fingerprick of blood, made headlines recently when it announced a partnership with AmeriHealth Caritas and with Pennsylvania-based insurer Capital BlueCross.

"What happens with technology is you can decentralize, you can further distribute and you can facilitate access," she said. "So bringing, for example, lab information to the place where people are, as opposed to forcing them to go somewhere to get it, is at the core of our work."