A war of word 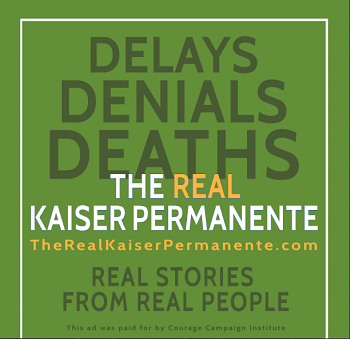 Members of the Courage Campaign Institute, the educational arm of the Courage Campaign, a California-based non-profit advocacy group, held a press conference Wednesday to detail charges that Kaiser launched a retaliatory ad campaign that mimicked their own campaign (ad, pictured above right) to promote its website, which features first-person testimonials from current and former Kaiser mental health patients and their families. 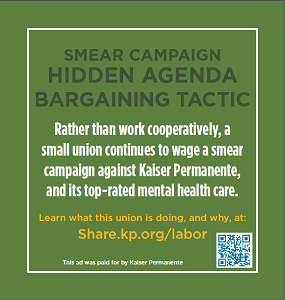 The group said Kaiser unveiled its ads (pictured left) the same day as the Courage Campaign's media blitz. They suspect the campaign design was leaked to Kaiser. But a spokesman for Kaiser told FierceHealthcare via email that the press conference--and the Courage Campaigns ads on Bay Area Rapid Transit trains that attack Kaiser's mental healthcare services--are just the latest efforts in an ongoing union smear campaign by the National Union of Healthcare Workers (NUHW). He said the union financed the advertisements to pressure the organization to meet its bargaining demands.

Courage Campaign Institute officials, however, said that the advertisements are meant to shine a light on the need for Kaiser to provide more comprehensive mental health coverage and treatment.

"If Kaiser responded to the needs of its mental health patients as urgently as it did our ad campaign, we wouldn't be running our campaign in the first place," Paul Song, M.D., executive chairman of the Courage Campaign and a practicing oncologist at Cedars-Sinai's Samuel Oschin Cancer Center, said in an announcement.

Numerous patients have suffered as a result of negligence and a lack of resources at Kaiser, Song said. Two public advocates, who they said had family members who were denied mental health services from Kaiser, also spoke during the conference about their personal experiences trying to get appropriate care for their family members.

"We find these tactics, which are intended to damage Kaiser Permanente's reputation and create unnecessary fear among our members and the community, to be deplorable," he said.

To counter the claims, Kaiser created both a public website and a site that discusses NUHW tactics.

Eddie Kurtz, executive director of the Courage Campaign Institute, said during the press conference that the organization gets funding from many unions, including a small amount from NUHW--but he didn't disclose the amount.

In 2013, Kaiser paid a $4 million fine after a routine survey from the California Department of Managed Health Care found Kaiser wrongly denied members appropriate access to mental health, for long wait times for care appointments and for providing members with inaccurate information about coverage.

The insurer was once again reprimanded by California regulators earlier this year for forcing depressed and some suicidal patients to endure long delays for treatment, according to a February piece in the Los Angeles Times.

To learn more:
- see the link for a photo of Courage Campaign ad campaign (.pdf)
- here's the link for a photo of the Kaiser campaign
- read the announcement about the conference
- check out the Courage Campaign's website featuring testimonials
- read Kaiser's website about its mental health services and its site about NUHW tactics
- here's the LA Times piece