Independence Blue Cross looks at its digital assets as an "ecosystem," says Paula Sunshine, vice president of consumer sales and marketing for the Philadelphia-based insurer.

That means that since it debuted its IBX Mobile app, the company has continually updated it to meet the needs of its customers and give them the utility that they want, Sunshine (right) tells FierceHealthPayer in an exclusive interview.

That led the company to completely redesign its member portal in July, adding features such as the IBX virtual assistant, where members can quickly get answers to questions simply by typing them in. The idea is to allow members to self-serve rather than wait for a customer service agent, Sunshine explains, adding that in the first two and a half months Independence answered more than 100,000 questions from customers.

The insurer's average monthly login rate for its IBX Mobile app (below left) also is up 40 percent in 2015 compared to 2014, which Sunshine says "speaks to the fact that our members are increasingly turning to self-serve and to the digital realm."

However, like many other healthcare organizations, Independence is always looking for ways to engage with more members more frequently through its digital tools. 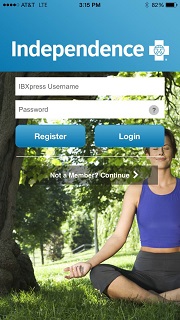 "I think every payer would probably tell you the same thing--that is that they'd like to see more usage of their self-serve assets," Sunshine says. "We're all in the process of putting lots of tools out there and we'd like to see our members avail themselves of them more frequently."

To accomplish that, the insurer employs another app called IBX wire, which Sunshine calls "a secure texting environment." Rather than wait for its members to come find the insurer's digital tools themselves, the service directs them right to the asset that they need, at the right time by texting their phones.

For example, if Independence receives a claim from an HMO plan member who does not have a primary care physician, the app can push out a message to the member that sends them to the insurer's provider-finder feature, them link them up to the member portal to update that information and get claims processed faster.

The texts can also be more general--such as one that the insurer sends out to remind members that they can manage their health on the go with the IBX app. On days it sends that message, the company sees a 20-times increase in the number of app downloads as opposed to the daily average, according to Sunshine.

The insurer is also currently in the middle of a major project to update its price transparency tools, Sunshine adds. For both healthcare providers and payers, pressure has increased in recent years to make pricing and reimbursement more clear to consumers.

Independence's effort will focus on giving members a better idea of their out-of-pocket costs when seeking treatment, and the company has relied heavily on both internal and external feedback when updating and developing the new price transparency tools, Sunshine says. The internal feedback comes from a group of associates from the company known as the "Portal Posse" that helps digital tool developers hone their thinking before taking an idea out to a larger, external group, she adds.

"We're always testing and trying to get better and [asking] 'Does this resonate?' and 'Is this in the right place?' and Is this clear?'" Sunshine says.