Florida Gov. Rick Scott (R) claims that insurers participating in the state's Medicaid program are negotiating hospital rates that are too high, a reason why the program is not generating enough savings, reports the News-Press.com. 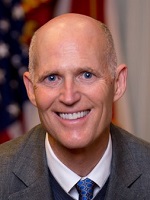 In a letter Monday, Scott told state health officials to evaluate hospital contracts. Those contracts with rates higher than 120 percent of the Medicaid cap could face termination, and the state also could kick insurers out of the Medicaid program. Scott (pictured right) recently asked insurers to prove their contracts meet the requirements, and ordered the Agency for Health Care Administration to audit all insurance and hospital contracts that didn't prove they were compliant by Aug. 1.

Documents show that fewer than a dozen hospitals seem to have contracts with rates higher than 120 percent, notes the article.

However, state officials say Scott's latest action is, perhaps, premature. "The state has challenges controlling the cost of the program, and they'll eventually effectively figure out how to deal with that, but (saying hospitals are paid too much) is not the way," Florida Hospital Association President Bruce Rueben tells the publication.

After the state cut hospital funds and insurers lost $542 million through 2014--mostly due to higher-than-expected usage rates and more demand--many insurers have asked for a mid-year raise of nearly $400 million, and a 12 percent rate increase on premiums. However, the state countered the proposal by offering insurers a statewide average increase of 6.4 percent, Currently, negotiations continue for rates that begin Sept. 1.