For one Midwestern insurer, deploying a massive, bright-turquoise RV emblazoned with the company's brand started out as just a funny idea.

"It kind of made you chuckle a little," Dannette Coleman (right), senior vice president and general manager of individual and family business for Medica, told FierceHealthPayer in an exclusive interview. "But as we talked more about it we really saw the value and the benefits it could bring for us and communities we serve."

Dubbed the "Medica Mobile," the RV has become a key asset in the insurer's consumer engagement efforts, Coleman said, though she admits Medica is still exploring how and where to deploy the vehicle.

One of its first appearances was at the Iowa-Nebraska college football game the day after Thanksgiving, a major rivalry match that offered the perfect opportunity to make an impression. Medica, which already offers plans in North Dakota, Minnesota and western Wisconsin, is expanding to Iowa and Nebraska this year. 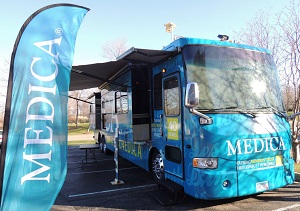 In addition to getting the insurer's name out there, the Medica Mobile (left) has the capability to sign customers up for coverage during the Medicare and individual open enrollment periods, Coleman said.

The insurer plans to hold future events in which it partners with insurance brokers, and the RV has also been present at enrollment events with Minnesota's state exchange, MNSure, Coleman added.

"Bringing in a 41-foot RV ... creates a little bit of an event atmosphere around it. It creates some energy," she said.

Once open enrollment concludes, Medica plans to continue to use its RV to reach out to customers by bringing it to health fairs and other awareness events. Through the technology on board, it also can assist members throughout the year with information about their claims and benefits.

Even as other insurers are embracing brick-and-mortar storefronts, the benefit of having a presence on wheels is that it allows Medica to meet people where they are instead of asking customers to come to it, according to Coleman.

"We in the insurance industry need to stop assuming that we know what people want and really listen to our consumers about what they value and meet those expectations," she said. "And part of the Medica Mobile is an acknowledgement that we have to meet them where they are, not expect them to come to us or find us."

Under federal mandates and public scrutiny, healthcare payers need strategic plans to reduce wasted administrative resources, prevent profit loss and keep premiums reasonable. Identifying the inefficiencies that can be solved with implementation of healthcare IT solutions, such as electronic signatures, is one answer. Read more!