And for the Hispanic population, language barriers can add to the problem, she says. That's why FAIR Health, with funding from the New York Community Trust, developed a Spanish-language version of its mobile app that offers both educational content and cost information to help Hispanic consumers in New York City navigate the healthcare system.

Called FH CCSalud, the app (below left) is free to users and is currently available on Google Play and in the Apple store.

FAIR Health made its app available in Spanish because research has shown that the Latino population relies very heavily on their mobile phones as a source of information, according to Gelburd. 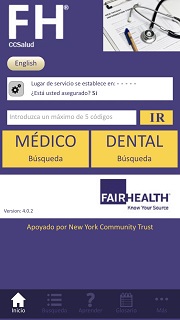 FAIR Health debuted the app during Hispanic awareness month this year, and the festivals around the city allowed the organization to engage in outreach efforts with community organizations.

"And the reception has really been overwhelmingly positive," Gelburd says. "There's a general appreciation that consumer engagement tools have to be culturally sensitive. Everyone is recognizing right now, it's a new paradigm for consumers in the healthcare marketplace--English speaking and otherwise--but if you're going to really arm consumers with actionable information, it has to be presented in a way that meets their needs."

The app's basic function is to "provide a warm welcome mat" for those who want information about health insurance, Gelburd says. Thus, a key feature is a series of chapters that explain the basics of health insurance, including the difference between HMOs and PPOs, how to understand explanation of benefits, and how narrow networks, high-deductible health plans and flex spending plans work.

Then there's the price-estimator functionality, in which two separate portals--medical and dental--allow app users to search FAIR Health's data by geographic region. Using that data, consumers can learn what the expected charge would be for medical or dental procedures, estimate reimbursement amounts if they seek out-of-network care, and adjust and customize findings based on their health plan.

Since FAIR Health doesn't provide individual consumer counseling, the app also directs consumers to organizations where they can get specific kinds of questions answered. "So we kind of play traffic cop on the road out there and let them find different resources that may be valuable," Gelburd says.

FAIR Health encourages insurers to share the educational tools with their members, Gelburd adds, calling the cooperation between nonprofit and for-profit entities "very much a natural alliance."

Health plans face such an onslaught of regulatory requirements now that their plates are so full, she says, noting that she's found that insurers are receptive and appreciative of organizations willing to take some consumer-engagement duties off of their hands as long as it is done responsibly.

"It's a win-win for the consumer and the health plan to make these kinds of resources available," she says.