As one of the nation's largest health insurers, Aetna is no stranger to using technology to reach its members.

For example, the insurer partners with a mobile app called iTriage (below left), which helps members understand what their symptoms are and find appropriate care--saving money by directing non-emergency cases away from the emergency department, Michael Palmer (right), Aetna's chief innovation and digital officer, tells FierceHealthPayer in an exclusive interview.

Then there's an app called ActiveHealth, which helps patients manage their conditions. Aetna members can access the app with a "seamless" transition from the insurer's general MyAetna app, Palmer says.

But the array of mobile offerings presents its own challenge, according to Palmer. "Making all of that feel seamless--I do lose sleep at night over that for sure," he says. "As a consumer I know how frustrating it is when things don't work right." 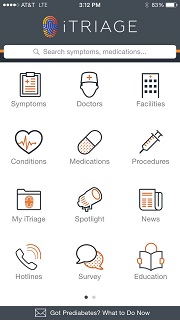 Aetna employs a type of "constellation strategy" to try to knit its disparate mobile offerings together, Palmer says, adding that many big companies have learned that offering every feature in one app can be confusing for consumers. Yet it's also important to synchronize sign-ins among apps and features for the sake of convenience, he points out.

Based on consumer testing in preparation to launch new engagement tools, Aetna decided to reduce the number of features that it makes available on its apps, Palmer says. Feedback indicated that people didn't really want their insurance company helping them manage their day-to-day health activities--they thought it was their healthcare providers' job.

Aetna also decided in 2014 to end its mobile platform, called CarePass, which had allowed consumers to track certain health apps through one online hub. As Palmer told FierceHealthPayer at the time, engagement and uptake of the technology was simply not where the insurer needed it to be. "We're trying to be fast innovators, getting things out to the market as quickly as we can," he said. "The things that work, we'll continue with. And the things that don't work or no one is using, we'll shut them down."

Among its current offerings though, Aetna reports considerable uptake: Its customers accessed the Member Payment Estimator more than 1.6 million times in 2014, a 23 percent increase from the previous year.

One new initiative the insurer debuted this month is a rewards system that blends consumer literacy and technology, Palmer says. Recognizing that many Affordable Care Act exchange customers are newly insured, educating consumers about how to use the healthcare system both affordably and effectively is part of the organization's obligations, he adds.

So the insurer offers monetary rewards cards for those who watch a video about how to use their benefits, hook up their FitBit to their health records or fill out a health risk assessment, which allows Aetna to provide personalized health recommendations for them.

As for Aetna's overall mobile strategy, Palmer sees a future when its importance will only increase.

"Some people's only reliable internet connection is through phones," he says, adding that he thinks mobile will continue to be the place for transactional tasks that members do frequently and for managing their health.

"Getting people to download [apps] is no small task, but once they do they get engaged," Palmer says. "We see it as really, really increasingly important to make them affordable and personalized."